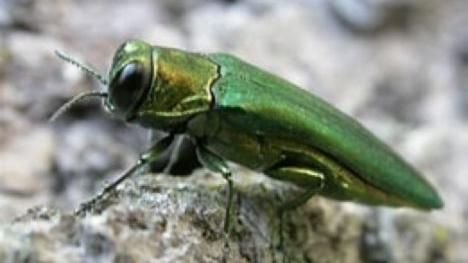 If I look at the trees under my house, I have four large trees that died this year.

We had a wonderful growing season so I wondered why?

When my forest friend came to visit, I asked if he had noticed the same problem. Of course he knew exactly what was going on and identified the lost trees as ash. Two species of ash grow in our area, green ash, Fraxinus pennsylvanica, and white ash, Fraxinus americana.

The reason our native tree dies is the Emerald Ash Borer (EAB), Agrilus planipennis; they only attack ash trees. This insect was first discovered in the USA in Michigan in 2002 and is believed to have come from wood packaging material from Asia. Yes, Asia again; We can already thank them for Japanese beetles, Asian ladybugs, Asian tree squirrels, and our newest scare, Asian giant hornets.

Since its discovery, this destructive insect has been found in numerous states, including Tennessee. Typically, the emerald ash borer beetles can kill an ash tree within three years of the first infestation. The emerald green ash borer is a metallic green beetle that burrows into ash trees that feed on tissues under the bark and eventually kill the tree. EAB is now found in many states across the Midwest and the East and has killed tens of millions of ash trees.

The larvae (the immature stage) feed on the inner bark of the ash trees, which disrupts the tree’s ability to transport water and nutrients. This interruption of food and water inside the tree girdles it and causes the tree to die. Both healthy and unhealthy trees can be attacked.

Adults are dark green, half an inch long and an eighth of an inch wide, and only fly from April to September, depending on the region’s climate. In Tennessee, most EAB adults fly in May and June. The rest of the year the larvae spend under the bark of ash trees. When they emerge as adults, they leave D-shaped holes in the bark that are about an inch wide.

Ash trees are an important forest tree in our area. White ash wood is used for the handles. It is the standard for shovels, spades, hoes, and rakes. It can also be found in furniture, especially the curved parts of chairs. Sports equipment such as oars and baseball bats use this smooth, finely grained wood. It’s also good firewood.

What can we do to stop the spread? We are encouraged to fell dead and dying ash trees and to chop, burn, or bury the wood on the property in accordance with all local regulations to reduce the chance of attack on other trees. This is a big problem and it sounds like a lot of work.

The NCDA & CS has imposed a nationwide quarantine to prevent the human-facilitated relocation of EAB to new areas. The Emerald Ash-Lange is pretty, but we’ll probably never see her. We’ll only see the results – dead trees and the larva or D-shaped holes that are left over when it escapes to another tree.

Gayle Fisher is a Master Gardener for the state of Tennessee and an accredited judge for the National Flower Show. As a student landscaping consultant, she served as an officer in the District IV Tennessee Federation of Garden Clubs and is a member of the American Horticultural Society. She can be reached at [email protected]

Gayle Fisher is a Master Gardener for the state of Tennessee and an accredited judge for the National Flower Show. As a student landscaping consultant, she served as an officer in the District IV Tennessee Federation of Garden Clubs and is a member of the American Horticultural Society. She can be reached at [email protected]